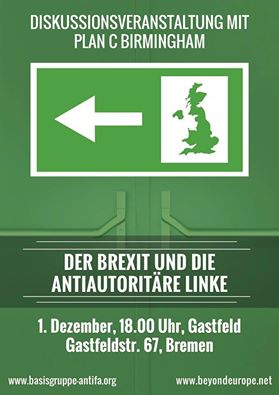 Earlier this year the section of the UK’s population which is allowed by the state to have a say in such matters voted to leave the EU. The reasons for this were conflicted, with many reasons to leave and to stay being put forward by the left and the right. Some wanted to leave due to racism and nostalgia for the days of the British Empire. Others where motivated by a genuine opposition to the bureaucratic, undemocratic and neoliberal nature of the EU, or by the way in which their community had been abandoned by the current order. They saw in the referendum on the EU a chance to fu ck over the political class which had fu cked them over. The reasons to stay were just as varied. From those worried about how leaving the EU could allow the Conservative government to scrap workers and general human rights that they have been attacking; to those who were convinced that it would further empower the far right; or those who were little more than the cheerleaders of international capital seeking to protect the interests of British companies and to keep the UK “competitive” on the international market.
Since the vote, attacks based on race and ethnicity have increased and although it would be ridiculous to claim that everyone that voted for leaving the EU was a member of the far right, it also can’t be doubted that many on the right feel vindicated by it. So where does this leave the anti-national and anti-authoritarian left in the UK and Europe as a whole?
We, the Basisgruppe Antifa, invited Plan C, from Birmingham, to introduce and discuss this topic with you.